National news for one of the UK’s happiest people

Comedian, author and educator Shonette Bason-Wood enlisted the support of The Tonic following her listing as one of the UK’s happiest people by the Independent newspaper. Shonette called upon The Tonic to maximise the impact of this by raising her personal profile alongside her Spread the Happiness charity, which distributes food hampers to children in disadvantaged communities across the UK, during the school holidays.

The Tonic developed a content-led PR campaign to engage with regional and national journalists plus broadcast producers to help Shonette to reach new audiences with her uplifting messages.

National media that covered Shonette’s story and her charity initiative included the Daily Mirror, Talk Radio’s Steph & Dom show, and The Sun. Shonette was signed up as an expert contributor to Sunday Woman magazine, where she now gives regular advice and tips on happy parenting. She was also selected as an expert interviewee for Good Morning Britain, participating in the selection process to appear in an upcoming segment on the sofa beside Piers Morgan.

The campaign delivered a multi-million reach, and a CPM of just 88 pence.

Shining a light on the Invisible Talent Pool 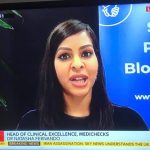